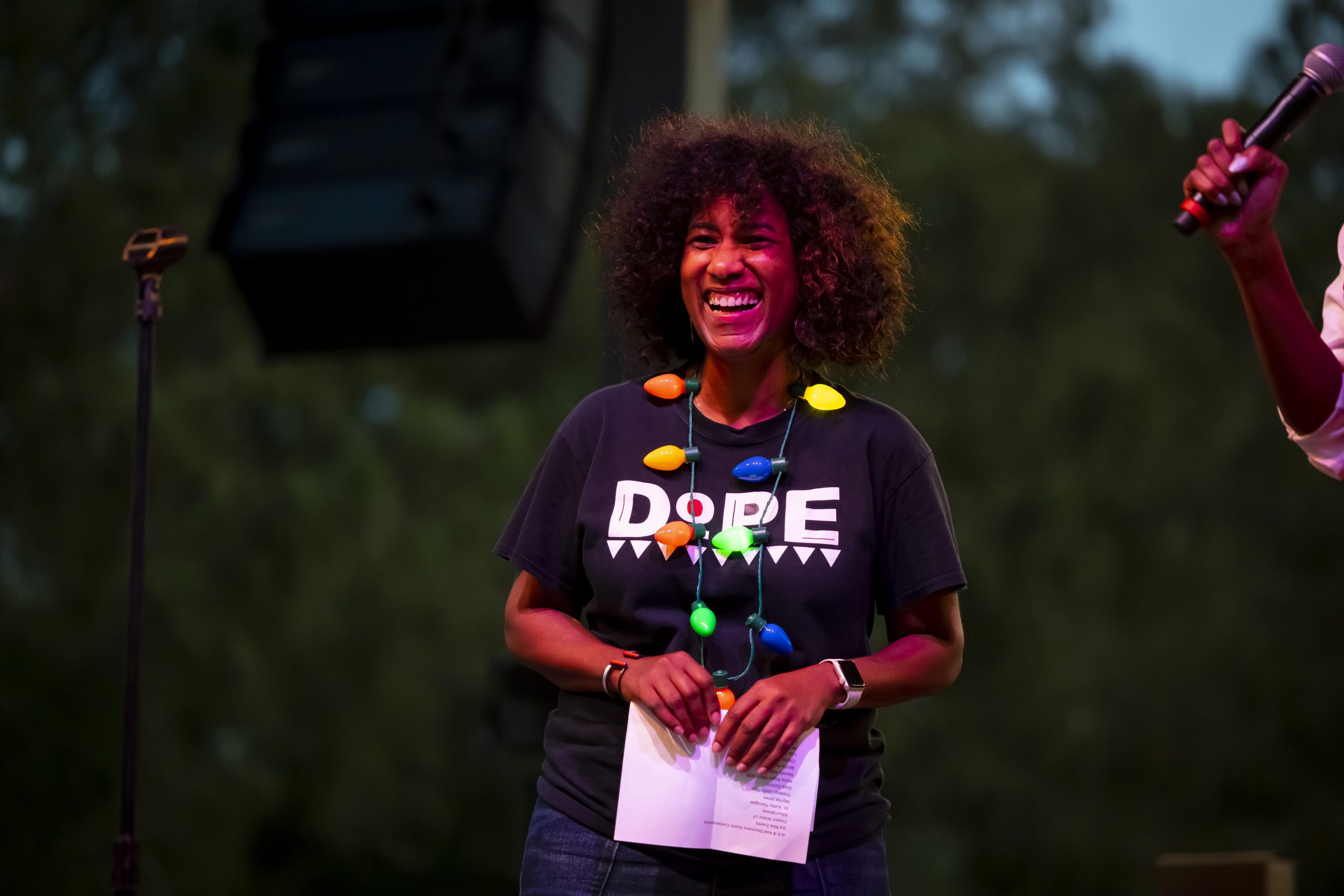 “I was really trying to leave,” said Sewing, a native Houstonian. “I felt like I’d done all I could do in the fashion realm that I had. I felt I needed another challenge.”

“When George Floyd happened, I think a lot of journalists, particularly Black journalists who may not have been focusing in a big way on issues of race, kind of felt like they had to speak up,” Sewing said.

She made a monumental career shift, switching her focus from covering the fashion world to raising issues of race, culture and family as a Chronicle columnist.

Floyd, whose brutal death by Minneapolis police in 2020 was captured on video and sparked nationwide protests, grew up in Houston. Sixty-thousand people gathered at Houston City Hall to honor Floyd and protest his killing.

“We didn’t have Black reporters covering it, and that troubled me. I kind of inserted myself into it, and at that time I decided I wanted to be a columnist,” Sewing said. “I felt like I had to speak up and use my platform to tell meaningful stories.”

Besides Floyd’s death, there were other factors that influenced Sewing’s decision: the onset of the pandemic, her adoption of two children and conversations about race and culture emerging in workplaces, including newsrooms. There were unlimited stories for her to tell.

Her weekly column debuted in August 2020. She used it to write about her father, Richard Sewing, and a longtime friend of his. The two aging gentlemen reminisced about their younger years, including when they marched in Houston with Rev. Martin Luther King Jr. Richard Sewing died the day the column appeared in the newspaper.

Among the numerous Chronicle colleagues happy to see Sewing’s promotion is features digital manager Julie Takahashi. She said Sewing often uses her column as a platform for diverse Houstonians to be heard, something Takahashi says is badly needed at the newspaper.

“One of the things I find so fascinating about Joy is not only is she native to Houston, but she has this passion — basically screaming that we need to have more representation in our articles, photojournalism, and our digital presence,” Takahashi said.

Because of the column, Chronicle readers learned about Tony Jones’ decision to move his family from the Houston area to Ghana to get away from racism in the United States; the reunion of two dozen Chinese Houstonians who met regularly as teens and first-generation Americans seven decades ago; and self-taught ice skater and Colombia native John Esteban Catano Molina’s commitment to perfecting his skills.

Sewing’s pivot to columnist is part of a broader focus by the Chronicle on diversity and inclusion, Takahashi said. She credits Executive Editor Maria Reeve, the first Black woman to lead the Chronicle newsroom. Reeve, who was appointed top editor last summer, reinvigorated a Unity group that advocates for more diversity, equity and inclusion among the staff and selected Sewing to establish a culture desk that pushes for better coverage of race, religion, LGBTQ groups and other issues.

Apart from writing, Sewing is busy caring for her son, daughter and two dogs, running her nonprofit, staying active in her Third Ward neighborhood and accepting invitations to speak or moderate panels.

“The thing that amazes me about Joy is her ability to balance so much. She has this uncanny gift of knowing when to call and ask for help,” said Sara Selber, a longtime friend who helped Sewing establish her nonprofit, Year of Joy.

Year of Joy brings cultural, educational and other joyful experiences to children living in Houston’s underserved communities. The organization hosts an annual ice skating party each December that has entertained more than 1,000 children since 2016.

Sewing said the main reason she is committed to writing stories that push for change is her own children.

“I’m older, a bit wiser, and I want the world to be a better place for my children,” she said. “My father was rooted in the community and was big about leaving a mark and a legacy. I feel like I’ve been given the opportunity to not only tell stories of people and our community, but to drive change perhaps.”

Maysoon Khan is a journalist at The Boston Globe, where she covers breaking news and provides research for investigative reports by the Spotlight Team. Follow her on Twitter @MaysoonKhan.